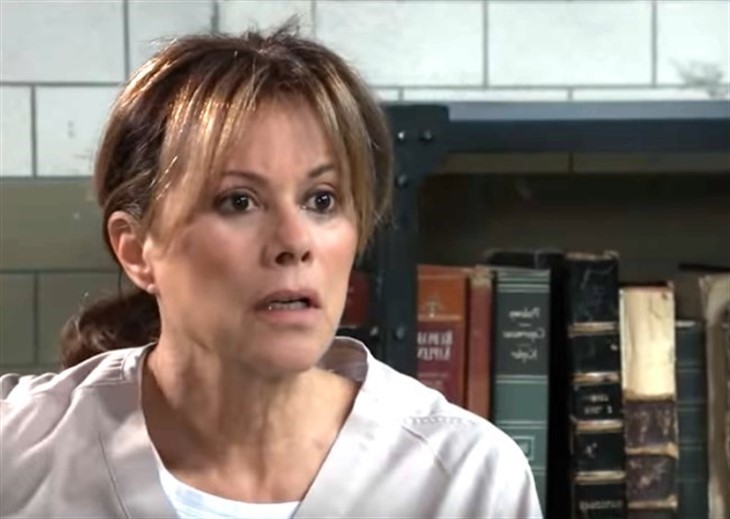 General Hospital fans know that Ryan is at least partially faking the illness that landed him in this minimum-security facility. Ryan is pretending to be non-responsive to stimuli as well as people. Ryan has perfected his technique and not one suspects anything. However, it is impossible for Ryan to move in and out of the facility to stalk Ava on his own.

Ryan is still confined to a wheelchair and his absence would be noticed. However, Ryan is very good at manipulation and it seems he has found the perfect assistant. After all, Spencer Cassadine (Nicholas Chavez) refused to work with Ryan, however, he has found help and Alexis could expose his co-conspirator.

GH Spoilers – Harmony Miller Is Up To No Good

General Hospital’s Harmony was released on parole months ago. However, Alexis will bump into her at Spring Ridge. Harmony would have no reason to know Ryan except through Nelle Benson (Chloe Lanier). Nelle and Ryan were very close and Nelle worked with Harmony as well. Nelle may have instructed Harmony to help Ryan no matter what he needs.

It doesn’t take a lot for Harmony to throw in with the crowd and helping Ryan would be doing that. Ryan has a volatile personality and Harmony feeds off his type. After all, Harmony was Shiloh Archer’s (ex-Coby Ryan McLaughlin) accomplice while he was raping cult members.

General Hospital’s Ryan knows everything that has been going on with Ava. However, now that Ava and Nikolas Cassadine (Marcus Coloma) have decided to divorce, the stalking is expected to stop. Unfortunately, that is not the case. Ryan will pick up where Spencer left off. Alexis could discover that Harmony is planting these horrible gifts where Ava will find them.

Alexis is in the same facility and could very easily overhear Harmony and Ryan finalizing their plans. Will Alexis be the one to expose Ryan and Harmony’s connection? Could Ava and Nikolas reunite after the threat is eliminated?