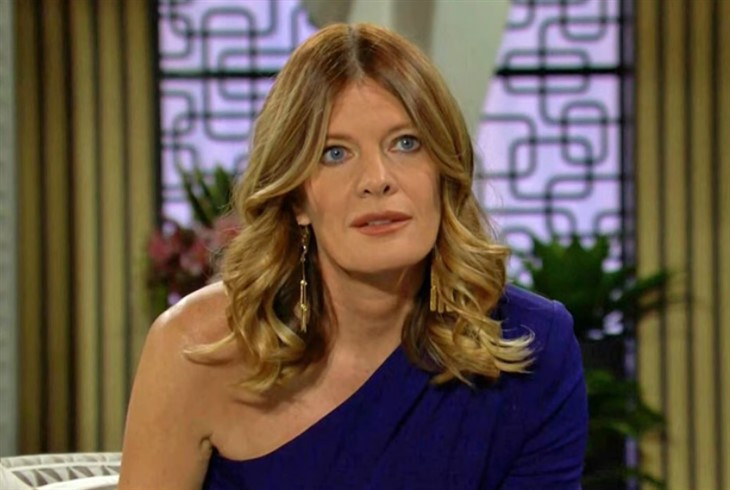 The Young and the Restless spoilers and updates tease that Phyllis Summers (Michelle Stafford) will do all she can to expose the truth regarding Summer Newman’s (Hunter King) sudden decision to end her engagement with Kyle Abbott (Michael Mealor) and move to Italy for a new job. She knows that Sally Spectra (Courtney Hope) and Tara Locke (Elizabeth Leiner) have something to do with it and she’ll make sure to get to the bottom of things.

The Young and the Restless promo for the week of July 26-30 shows an angry Phyllis talking to Jack Abbott (Peter Bergman). She says, “Those two little girls ran my daughter out of town and I will get the proof, believe me.” Then Sally says Phyllis wants to ruin her life.

Tara tries to calm her down as they both talk over the phone while Kyle suspiciously looking at her in the background. At the end of the promo, Sally tells Phyllis that she’s “spiteful and vicious, and you’re making a big mistake underestimating me.”

Fans may recall that Sally talked to Eric Forrester (John McCook) and asked for a favor for Summer. She pretended like she wanted to help Summer but the truth was that she wanted to get her out of the way so she could advance her career.

In the week of July 26, Phyllis will take on an aggressive approach with Sally in her quest to find out the truth behind Summer’s decision to leave. Victor Newman (Eric Braeden) and Nikki Newman (Melody Thomas Scott) will visit Summer in Italy but it’s highly unlikely that she’ll come clean. Victor and Nikki will sense that something is wrong and they won’t buy Summer’s act that she’s happy with her new life.

As for Jack, he’ll continue to fall hard for Sally. He doesn’t trust her at first but it’s difficult not to get attracted to the redhead. He’ll even have a surprise prepared for her on their next date.

Meanwhile, Kyle will warn Phyllis to back off. He defends Tara and says she’s a good person and had no intention of derailing Summer’s life. Kyle is convinced that Summer made her decision but Phyllis knows that her daughter was forced into that situation.