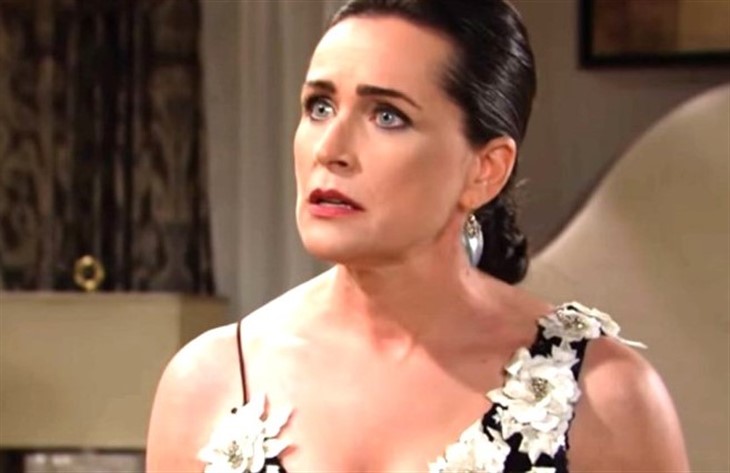 The Bold and the Beautiful spoilers document that Quinn Fuller (Rena Sofer) isn’t over Eric Forrester (John McCook). But outwardly she has surely moved on.

Brooke Logan Forrester’s (Katherine Kelly Lang) will offer her two cents regarding the exchange that Eric and Quinn will have. Lang’s iconic character, along with McCook’s, date back to the debut of the show in 1987. The Bric connection runs deep, with Quinn’s ejection bringing Brooke bittersweet satisfaction.

Eric is Brooke’s first husband. That’s one reason why this pairing cares about each other, with their first marriage being in the early 1990’s. They had two children, Rick Forrester (Jacob Young) and Bridget Forrester (Ashley Jones), and also remarried in the mid 2000’s, for a brief period.

The Bold And The Beautiful (B&B) Spoilers: Steffy Invites Paris In to Be Her Friend Or Rival

Brooke never stopped protecting Eric while he was married to Quinn. Lang’s character always felt that Quinn didn’t love Eric, but was manipulating his emotions in order to secure a good life for herself.

Quinn’s duplicity was often cited by Brooke during Queric’s marriage. Among other instances, Quinn’s kissing session with Ridge Forrester (Thorsten Kaye) on the beach was evidence that Brooke was right.

The play for Carter Walton (Lawrence Saint-Victor) represents a brazen betrayal. Not only in going to him while Queric was still in existence, using the excuse that Eric wasn’t paying attention to her, but also now, in staying with him.

If Carter isn’t careful, Quinn will cause him to permanently damage his personal connection with Eric. The trust Carter earned through years of friendship and workplace loyalty will be smeared.

Eric and Ridge have convinced themselves that Carter learned his lesson. That joint conclusion is more about their friendship with Carter, than it is reality or common sense.

Carter has been pulled pulled into Quinn’s enticing aura. He believes that she’s like no other woman in the world. Echoes of Carter saying similar things to Zoe Buckingham (Kiara Barnes) are heard by the audience in those scenes, no doubt.

If anyone has the instinct and tenacity to stay on this story and reveal it, Brooke does. Alternatively, Quinn might be so bold to tell Eric the truth about herself. Either outcome or some other reveal scenario won’t be pretty on B&B.