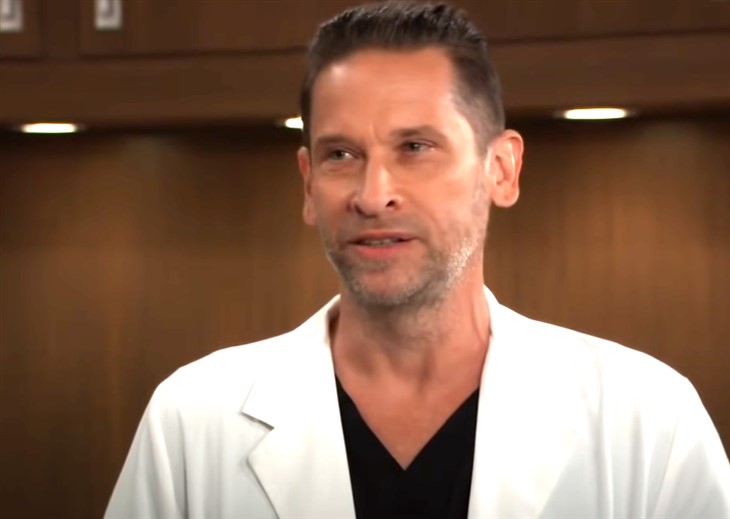 General Hospital Spoilers tease that Dr. Austin Gatlin-Holt (Roger Howarth) hasn’t exactly endeared himself to the Quartermaine family. Although when we first saw him, he helped Maxie Jones (Kirsten Storms) give birth in the woods. But ever since that heroic act, Austin has done quite a few shady things, leaving his family, the Quartermaine’s unsure what to think of the newcomer to the family.

Austin didn’t win any favor when he announced he was actually the son of Jimmy Lee Holt (Steve Bond), the illegitimate son of Edward Quartermaine (the late John Ingle). Jimmy Lee had long since been disinherited by Edward, but Austin claimed that Edward had changed his mind shortly before he died. Therefore, he was contesting Edward’s will, which the Quartermaine’s took as a threat. In particular, Brook Lynn Quartermaine (Amanda Setton) doesn’t trust Austin at all. And Austin’s later actions didn’t help his cause any!

Austin befriended Harrison Chase (Josh Swickard) who had just regained the use of his legs after being poisoned left him temporarily paralyzed. But Chase, and Austin, found evidence that Chase’ wife Willow Tait (Katelyn MacMullen) had cheated on him. Austin used the usually moralistic Chase and convinced him to hide the fact that he could walk. Austin wanted Chase to be able to roam the Quartermaine mansion and obtain proof that Edward had planned to put Jimmy Lee back in the will. Chase did find the information, but instead gave the document to Michael Corinthos (Chad Duell). But Austin’s shady behavior didn’t go unnoticed.

Leo Falconeri (Easton Rocket Sweda) is Olivia Falconeri’s (Lisa LoCicero) son by Julian Jerome (William DeVry). Julian has since died, but Olivia’s current husband, Ned Quartermaine (Wally Kurth) is adopting the young man. Recently, Leo cut his finger and had to be taken to General Hospital, where Austin treated him. Austin noticed that Leo may communicate differently that most children and suggested to Ned that he and Olivia take Leo to see a specialist. While Austin didn’t say what he though might be the issue, General Hosptial viewers believe that Leo may have autism. If so, the Quartermaine family will be grateful to Austin for noticing the issue before anyone else. They may realize Austin isn’t as bad as he first came across.

General Hosptial Spoilers – What do you think?

Do the Quartermaine’s have reason to suspect Austin’s motives? Or is Austin just doing what he has to for his late father? Will Leo be diagnosed with autism? Anything can happen in Port Charles, so stay tuned to General Hospital airing weekdays on ABC. And don’t forget to check back right here regularly for all your General Hospital news, information and spoilers!