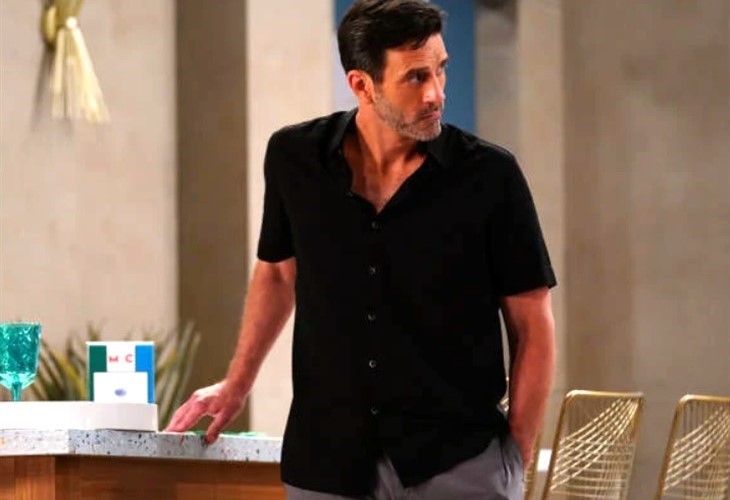 General Hospital (GH) spoilers and rumors tease that a Novak family cousin will be killed, and the Corinthos organization will be blamed in a future episode of General Hospital, according to a leaked script, or “casting side.”

General Hospital viewers will recall that Joey Novak (Patrick Zeller) was sent to Europe during the wedding and reception of Carly Corinthos (Laura Wright) and Jason Morgan (Steve Burton) after Jason confronted him for bothering Josslyn Jacks (Eden McCoy). Then Vincent Novak (Glenn Taranto) was also spoken to about Joey’s activities and he sent nephew Joey overseas so he wouldn’t become an interference.

Joey made a pest of himself at Jason’s bachelor party at the Savoy, Curtis Ashford’s (Donnell Turner) club, as General Hospital viewers will recall and made a loud drunken rant about Carly and how he wouldn’t be at the wedding. In the casting side, meaning a script where an actor tries out for a part, a character named Nicky, a friend of Joey’s is talking to him at Pier 54. They haven’t seen each other for a while, and the encounter is enthusiastic. Joey asks Nicky how Warsaw was, and Nicky advises him the Polish city was Odansk, not Warsaw. He tells Joey all was well until he got the news about Joey’s cousin, Salvatore (uncast).

General Hospital viewers will recall that Joey is Vincent’s nephew, but whether Salvatore is Vincent’s son or a cousin on Joey’s maternal side is not shown in the leaked script. Nicky gives Joey his condolences regarding his cousin Salvatore, calling Salvatore a great man. Joey tells Nicky that the Corinthos organization is responsible for Salvatore’s death.

Joey then tells Nicky that the Corinthos organization will surely pay for Salvatore’s death, and then he asks Nicky if he has been following “her” like Joey had told him to! “Her” is not identified, but General Hospital viewers can guess that she may either be Carly or Josslyn, based on previous General Hospital episodes.

“Her” could also be a different character, possibly a new one introduced in episodes between now and when this casting side scene is filmed. The script could imply that this female was being followed to Poland and back, but Nicky’s trip abroad may not have anything to do with following the female, either. This scene may not air for a couple of months, possibly sometime in November since General Hospital films around eight weeks ahead of airdate.

Next in the leaked General Hospital casting side script, Joey and Nicky plot to take over a club – wanting to use it for a cover business. The club could be The Savoy, since Joey and Nicky talk about recently having been kicked out of it! Nicky is a little doubtful and he asks Joey if he’s sure – and Joey confirms he wants to take over the same club they were recently kicked out of!

As for the previously mentioned recently deceased cousin Salvatore, General Hospital viewers will recall that Carly and Jason missed being the victims of a car bomb when either the two limos, one with Carly and Jason and one with associates of Vincent Novak and Charles Buscema (Bart Tangredi) in it were switched or the bomb was found and switched. It is possible that Salvatore was in the car that blew up!