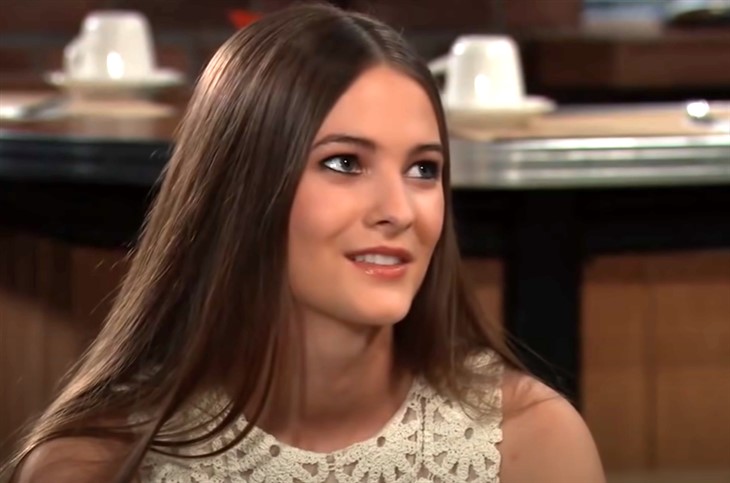 General Hospital Spoilers tease that Esme Prince (Kristen Avery Pohl) is infatuated with Ryan Chamberlain (Jon Lindstrom) for a reason. While she may have a personal connection to the serial killer that is yet to be revealed, she also seems to want to follow in his footsteps. Port Charles may soon be faced with another serial killer if Esme follows down the dark path she is heading in. She’s already done something that proves she is dangerous.

Esme came to town with Spencer Cassadine (Nicholas Chavez) and is helping him stalk Ava Jerome in an attempt to break Ava and Nikolas Cassadine (Marcus Coloma) up for good. But unbeknownst to even Spencer at the time, Esme set Ava’s car on fire and left her deceased daughter Kiki Jerome’s (Hayley Erin) hospital badge at the scene of the crime as a calling card of sorts. Spencer wasn’t happy that Esme took such extreme measures, but has kept quiet. Even though Ava seems to be about to leave town, Esme may want to finish Ava off before she leaves.

When Spencer went to visit his aunt Alexis Davis (Nancy Lee Grahn) at the Spring Ridge prison, Esme accompanied him there. And while Spencer and Alexis caught up, Esme was more interested in Ryan who is also incarcerated there. This didn’t go unnoticed by prison employee Harmony (Inga Cadranel) who warned Alexis that Esme is trouble. If Harmony continues to badmouth Esme, it wouldn’t be a surprise if she decided to shut Harmony up for good.

Trina Robinson (Sydney Mikayla) has had a crush on Spencer since the first time they met, even though he called himself “Victor” at the time. Trina already suspects that Esme is Ava’s stalker. That coupled with the fact that Esme won’t want to lose Spencer to Trina will likely put her at the top of Esme’s hit list, if indeed she goes down that route. Josslyn Jacks (Eden McCoy) has also made her distaste for Esme known, but she isn’t really a threat to Esme at this point!

Is Esme’s interest in Ryan purely personal? Or is she planning on taking over where he left off as a skilled serial killer? Should Ava, Harmony and Trina watch their backs when Esme finally snaps? Anything can happen in Port Charles, so stay tuned to General Hospital airing weekdays on ABC. And don’t forget to check back right here regularly for all your General Hospital news, information and spoilers!