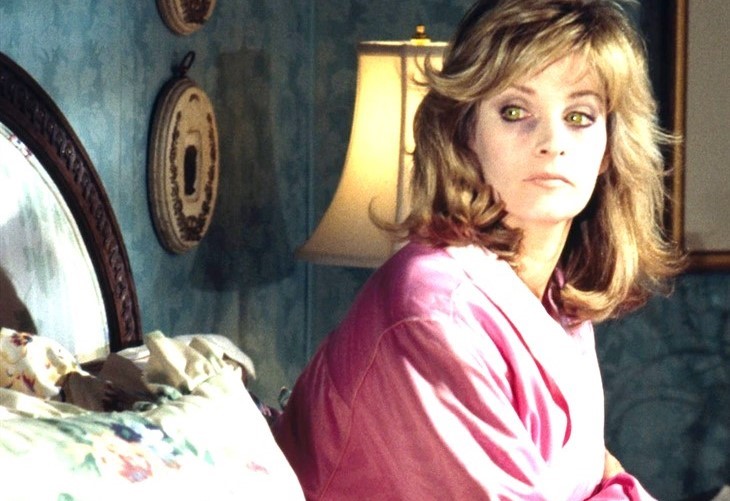 Days of our Lives (DOOL) spoilers reveal that thanks to modern technology a Satanically influenced Marlena will do some shocking new things that leave Salemites stunned. She may also revisit some of her past behaviors from the possession of 25 years earlier.

Spoilers for Days of Our Lives say that Marlena Evans’s (Deidre Hall) second demonic possession will repeat some of her past feats. Fans who were watching the ABC soap in 1995-1996 will recall that while under Satanic influence Marlena threw Stefano DiMera (Joseph Mascolo) out of a window morphed into a jaguar, levitated, and set the Salem Christmas tree on fire.

Days spoilers say there will be another levitation this time around and suggest there may also be a second fire. The demon will have Marlena kidnap her husband John Black (Drake Hogestyn) and hold him captive in order to prevent an exorcism as John had cast out the devil in 1976. During an interview with Daily Blast Live Deidre Hall was asked what she could reveal about the current storyline. Hall said there will be special effects that were not available in 1976 so more can be done.

Days Of Our Lives Spoilers – Former Salemites Will Return

Spoilers have revealed that former Salem residents will return to town and one fan favorite is Hope Brady (Kristian Alfonso). The actress has said she will not return but as Hope was a part of the first possession, it would be great if she returned this time around.

Days Of Our Lives Spoilers: Brady Flips Out, Begs Nicole Not To Make Colossal Mistakehttps://t.co/kFuxBWvL0R

Johnny DiMera, (Carson Boatman) is working on a film about Marlena’s life. Allie Horton,(Lindsay Arnold) Chanel Dupree (Raven Bowens), and Will Horton (Chandler Massey) have all been discussing this with Johnny so they may all be involved when Marlena begins spiraling out of control.