The Bold And The Beautiful (B&B) Spoilers: Eric Confesses To Katie, Ridge Thunderstruck 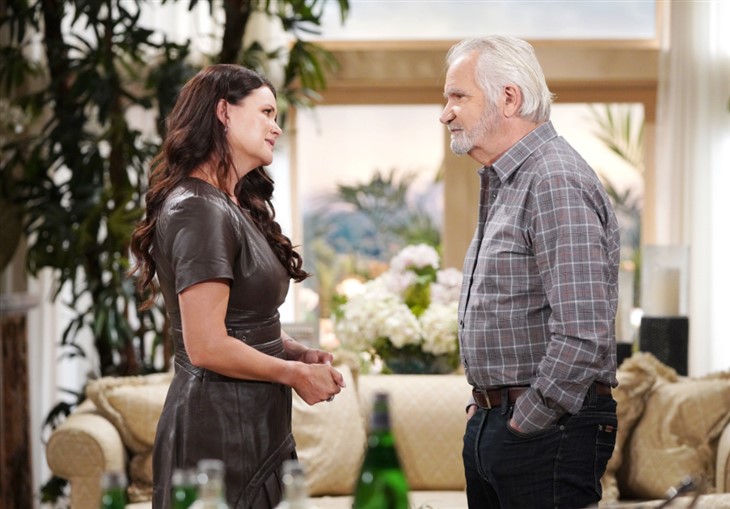 The Bold and the Beautiful (B&B) spoilers reveal that Katie Logan (Heather Tom) will continue trying to get answers from Eric Forrester (John McCook). As the two spend more time together, Eric will open up and make a startling confession. Meanwhile, Ridge Forrester (Thorsten Kaye) is thunderstruck by Justin Barber’s (Aaron D. Spears) information about “Quarter.”

The Bold And The Beautiful Spoilers – Katie Logan’s Determination

B&B spoilers reveal that Katie has been spending more time with Eric. The two are friends and have known each other for years. They are also next-door neighbors, so as everyone becomes more concerned about Eric, Katie gets determined to find answers. During the week of September 27, Eric and Katie will continue to strengthen their bond.

During one conversation, Eric feels comfortable enough to open up to Katie. It is confirmed that the patriarch will confess a shocking secret. It’s unlikely that Eric will tell Katie that he is allowing Quinn Forrester (Rena Sofer) to sleep with Carter Walton (Lawrence Saint-Victor). So, the intimate secret that Eric confesses is probably his diagnosis of ED.

The Bold And The Beautiful Spoilers – Justin Barber’s Bombshell

The Bold and the Beautiful spoilers reveal that while Eric is confiding in Katie, Justin will report back to Ridge. Justin walks into Carter’s apartment and goes to the bedroom, where “Quarter” is about to engage in passion. When Quinn and Carter realize that Justin is standing there watching them, what will their excuse be for being together? Will Quinn and Carter tell Justin that they have “permission” from Eric? Or will they keep quiet about the arrangement as Eric commanded?

Justin will report to Ridge what he learned about Quinn and Carter. While Ridge might have suspected Quinn was up to no good, he will be really angry with Carter. Despite their friendship, Ridge won’t appreciate that Carter is participating in hurting Eric again.

The Bold and the Beautiful (B&B) Spoilers: Paris goes to the Dark Side to get Finnhttps://t.co/HWgwuMC40U

However, there is information that Ridge will not be prepared to hear. In fact, Ridge might not even believe it and will confront Eric about his alleged “arrangement.” What will Eric say and when the truth comes out, what does that mean for “Queric” and “Quarter?” Will Eric and Quinn stay together or could this be the end of their marriage?

Even if Eric does try to explain his ED diagnosis and his reasons for pushing Quinn and Carter together, his actions won’t make sense. Eric’s “solution” doesn’t even make sense to fans, so it’s unlikely that Ridge will understand it, either. We will have to keep watching the CBS soap to find out what happens next.