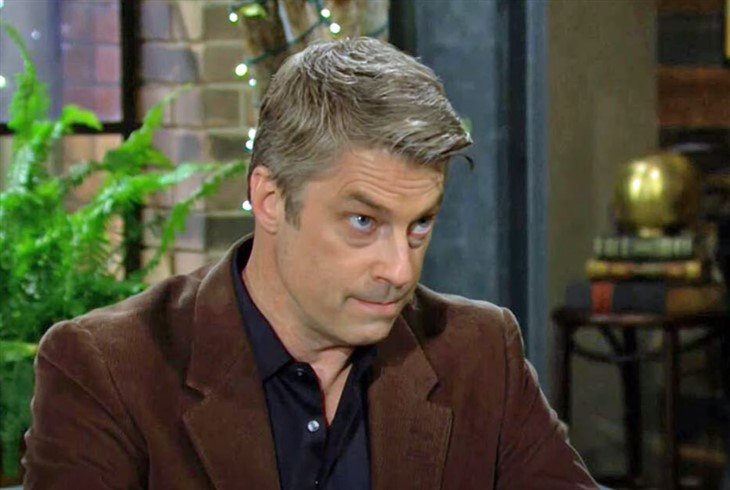 The Young and the Restless (Y&R) spoilers document that Jesse Gains (Jamison Jones) believes Ashland Locke (Richard Burgi) is not a threat. Jones’ character is an attorney, which could mean that he has ensured the information about Ashland’s purchase of two New Jersey television stations will be revealed if he were to be knocked off.

That is what the crescendo to this storyline projects to be as of early fall. Ashland can not possibly allow Gaines to shake him down for three million dollars because there is no guarantee that would be the final payout. Also, Victoria Newman (Amelia Heinle) could learn the truth at any point in time, which could mean the wedding and the merger collapses.

Young And The Restless Spoilers – Billy Abbott Was Right

Billy Abbott (Jason Thompson) has been labeled a trouble-maker and a liar, among other denigrating terms. But viewers know that he has been proven right, based on Jesse’s demands that Ashland verbally accepted.

Victoria did not want to hear Billy’s conjecture. Victor Newman (Eric Braeden) told Billy that he did not want him to interfere in Victoria’s personal life. However, the Moustache told Nick Newman (Joshua Morrow) to remain in contact with the former, other half of Villy in case he uncovered something useful.

Well, Jesse is telling Ashland that he will sell his story to Billy if the full payoff amount is not delivered. So, the real issue is no longer whether Billy is promoting theories but rather what happens if Jesse does not get his money.

As Nick told Phyllis Summers (Michelle Stafford), Ashland admitted that the name he has used for decades is not real. He invented it but has not been honest with Victoria or anyone else in Genoa City, Wisconsin, regarding why that choice was needed.

Jesse contacted Ashland because he learned about the terminal cancer diagnosis. Texts were followed by a demanded, in-person meeting. Will Bobby be willing to allow Jesse to call the shots considering the anticipated shortness of his life? What incentive would he have to do that?

Young And The Restless Spoilers – Victoria Newman Learns All

Victoria seems likely to learn the truth one way or another. If Ashland committed some heinous crime to obtain the money that fueled his media empire, then Vashland is likely done because he will face arrest or need to flee the state and potentially, the country.

Ashland has learned to trust Victoria. So he could gamble that she will stand by him if he tells her all now. But avoiding legal repercussions and other serious consequences seems unlikely on Y&R.

This site is a leading source for everything linked to The Young and the Restless. Check back