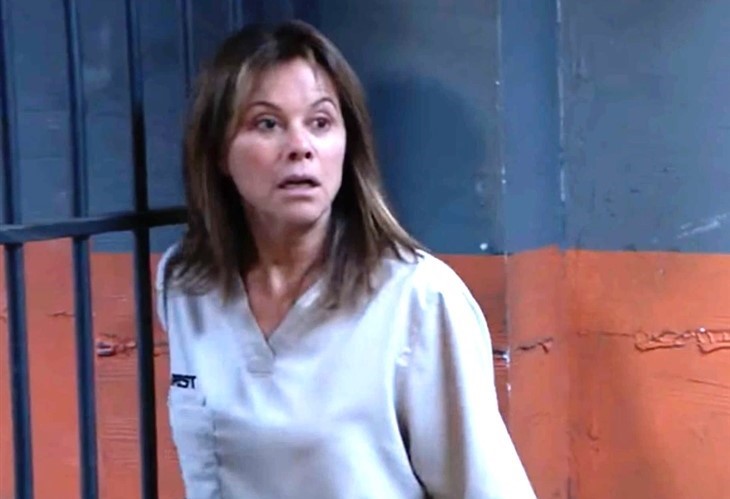 General Hospital (GH) spoilers and updates tease Alexis Davis (Nancy Lee Grahn) thought that she was going to be safe. Alexis had been sent to Pentonville Penitentiary for accidently attacking Dante Falconari (Dominic Zamprogna). Alexis reconnected with an old acquaintance Shawn Butler in Pentonville. Shawn and Alexis found out that Judge Naomi Carson (Anita Finlay) who had sentenced both of them was corrupt.

Ryan was sent to Spring Ridge because he is in a catatonic state after getting attacked in Pentonville. Ryan is a cunning serial killer that has been able to take over the life of his twin brother Dr. Kevin Collins (Jon Lindstrom). Alexis will be concerned that Ryan could be a danger to her but may believe that Ryan is really in a catatonic state. However, Ryan may be faking his condition. Ryan is obsessed with Ava Jerome-Cassadine (Maura West). Ryan killed Ava’s daughter Kiki Jerome (Hayley Erin).

Ryan thought that it would make Ava happy because Ava and Kiki were having problems with their relationship. He has not been happy that Ava married Nikolas Cassadine (Marcus Coloma). Ava and Nikolas have been targeted by a stalker who may or may not be Nikolas’ son Spencer Cassadine (Nicholas Alexander Chaves). Alexis may find out that Ryan is trying to come after Ava and Nikolas. Alexis would want to protect Nikolas because he is her nephew.

Alexis is going to encounter Harmony Miller (Inga Cadranel) in Spring Ridge. Harmony may be helping Ryan to go after Ava and Nikolas. Ryan and Harmony may have come together because of Nelle Benson (Chloe Lanier). Ryan and Nelle were close friends. Nelle had been married to Shiloh AKA David Henry Archer (Coby Ryan McLaughlin).

Shiloh had been the leader of the cult Dawn of Day. Harmony had been in the cult and was Shiloh’s most trusted member. Harmony left the cult but may have stayed loyal to Shiloh even though he is dead. Harmony may want to hurt Alexis because her daughter Sam McCall (Kelly Monaco) is the one who killed Shiloh. Alexis will have to be on her guard when she deals with Harmony.

General Hospital Alexis will have to be careful around Ryan and Harmony. Ryan may decide to go after Alexis if she tries to stop him from hurting Nikolas and Ava. Will Alexis find a way to stay safe and deal with Ryan? Harmony may want to hurt Sam for killing Shiloh. Will Harmony try to hurt Alexis to get revenge on Sam for the fallen leader of Dawn of Day?