The Bold And The Beautiful (B&B) Spoilers: Sheila Battles With Steffy Over Finn Restriction 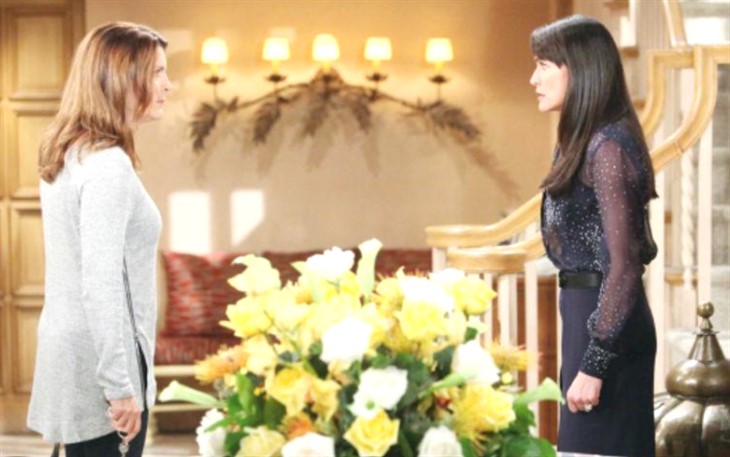 Longtime viewers of The Bold and The Beautiful will remember that Sheila has a bad history with the Forresters, going back years! After wreaking havoc in Genoa City, Wisconsin on The Bold and The Beautiful’s sister show, The Young and The Restless, she moved to Los Angeles. She quickly managed to get herself a position as a company nurse at Forrester Creations, and finagled herself into Eric Forrester’s (John McCook) life and bed.

They married, but it wasn’t long before psychotic Sheila showed her true colors. Steffy and the rest of the Forrester family have very good reason to fear Sheila and what she is capable of – and even though Sheila swears that she has changed, she’s still just the same old Sheila! Sheila always claims that she has changed, and wants to be given another chance – and when she is, she goes back to the same old pattern of mayhem and sometimes murder! She even murdered a man with a jar of bees, after finding out he was deathly allergic to beestings!

Viewers of The Bold and The Beautiful will recall that Sheila manipulated Dr. John “Finn” Finnegan (Tanner Novlan) into thinking she had a serious health condition, playing on his dedication to medicine! Viewers of The Bold and The Beautiful will recall also that Steffy challenged Sheila’s “illness” and told her to her face she was faking and told Finn Sheila was just trying to gain his sympathy in order to manipulate him! It was causing major problems between the couple and Steffy hadn’t even wanted to sign the marriage certificate and Finn spent a night or two in the guest house! Finn finally wised up and realized he had to choose between his birth mother and his wife, and vowed to not have anything further to do with Sheila. Sheila, however, refuses to accept it – she wants to be a part of her son’s and her grandson’s life! Longtime viewers of The Bold and The Beautiful and The Young and The Restless know that Sheila has several other children – including a daughter with Ridge Forrester (Thorsten Kaye) and yet not a word has been said to Finn about all his half-siblings! One has to wonder why!

The Bold And The Beautiful Spoilers – History Repeats Itself

Longtime viewers of The Bold and The Beautiful will remember how Stephanie Forrester (Susan Flannery) was very protective of Eric where Sheila was concerned, and there were some fierce confrontations! Now, viewers of The Bold and The Beautiful will see that Steffy is every bit as fierce when it comes to protecting Finn from Sheila, and Sheila refers to her battles with Stephanie over Eric! After yet another intense argument with Steffy, Sheila’s past her boiling point; and Sheila determines that she will not put up with this again! Sheila doesn’t like Steffy calling the shots where her son and grandson are concerned, and it is just the beginning of the war between Sheila and Steffy!