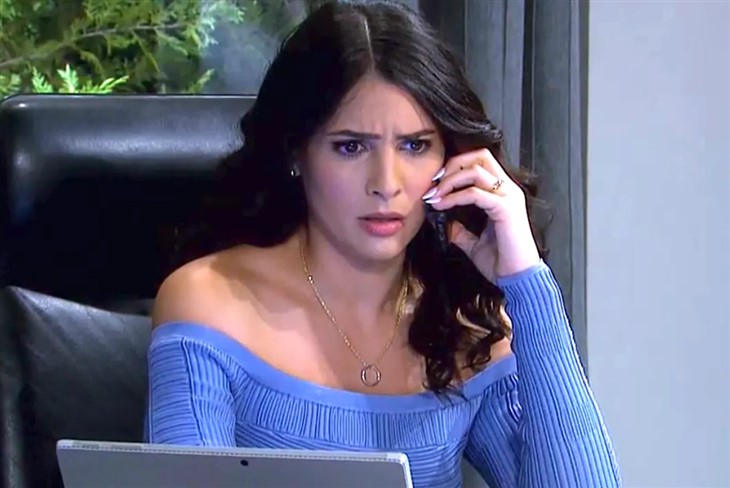 Days of Our Lives spoilers for the next two weeks are in. From August 8 to 19, Gabi Hernandez (Camila Banus) meets Alexander “Alex” Kiriakis (Robert Scott Wilson). Lucas Horton (Bryan Dattilo) will find out his fate after changing his plea to guilty. Plus, Anna DiMera (Leann Hunley) becomes suspicious of Kristen DiMera (Stacy Haiduk).

Days Of Our Lives Spoilers – Connections And Chemistry

DOOL spoilers for the week of August 8 reveal that Eric Brady (Greg Vaughan) and Jada Hunter (Elia Cantu) go out on a date. However, Nicole Walker (Arianne Zucker) is watching and fumes. Not only does Nicole watch but Jada notices how rattled Eric’s ex-wife is about it. In addition to this, Rafe Hernandez (Galen Gering) will grill Nicole about why she’s so interested in Eric and Jada.

Jada and Eric will go upstairs to the pub. Nicole assumes that they are going up to sizzle between the sheets. However, it seems more likely that Eric is showing Jada a room. Remember, Jada mentioned to Eric that she hadn’t found a place yet.

Jada will also be set up to become Shawn Brady’s (Brandon Beemer) new partner. The two will bond and Jada opens up a bit about her past.

Xander Cook (Paul Telfer) dresses up as Father O’Brien and goes to the prison. After tricking the warden, it appears Xander gets access to the prison computer system. This could lead him to discover that Gwen Rizczech (Emily O’Brien) had a visitor the night of Abigail DiMera’s (formerly played by Marci Miller) murder.

Later, Xander and Sarah Horton (Linsey Godfrey) try to get Ava to turn on Gwen. It doesn’t seem that Ava immediately flips on Gwen, though. What does happen is Gwen visits Ava at the DiMera mansion. When the two have a tense conversation, EJ DiMera (Dan Feuerriegel) listens nearby.

Days Of Our Lives Spoilers – What Else to Expect

Days of Our Lives spoilers for the week of August 8 reveal that Ava and Johnny DiMera (Carson Boatman) get caught in an awkward position. Dr. Wilhelm Rolf (Richard Wharton) reassures Kristen that his plan will work. Dr. Rolf will also have a meeting with Li Shin (Remington Hoffman). So, Li seems to have more secrets than anyone realized.

During the week of August 15, Gabi and Alex meet. Leo blabs about his suspicions regarding Gwen. This leads to Chad confronting Gwen about Abigail’s murder.

Even though Lucas isn’t facing murder charges, there is still the kidnapping charge. Lucas decided to change his plea to guilty. So, we will have to see what kind of sentence he gets.  Meanwhile, Anna becomes suspicious of Kristen.

What do you think is going to happen in the next two weeks? Share your thoughts and remember to keep watching the NBC soap to see what happens next.