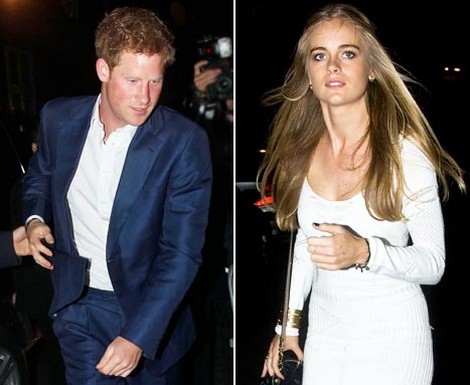 Prince Harry must really be regretting his naked antics in Las Vegas now. First the royals came down on him and now it seems he may have ruined his chances with heiress, Cressida Bonas.  The couple has been spotted together throughout the summer and according to friends, things appeared to be heating up nicely between Harry and the model.  The young couple was even invited to Sir Richard Branson’s Caribbean island, Necker for a birthday bash.

A source for The Sunday Mirror says,  “They had been for a few dates including one just before Necker. Things went further there between them and they had a great time fooling around.  Everyone in their group thought they were getting it on. Cressida definitely saw the romance as a goer and is gutted by what happened. Harry has blown it. Cressida saw a future with Harry but then he went and embarrassed her like he did in Vegas.  He clearly isn’t as serious about her as he had claimed to be and it’s highly embarrassing. He’s ruined his chances now. She’s humiliated.”

The couple is now said to be taking a break on Cressida’s request.  Rumor has it that one of the women who partied in the room in Vegas with Prince Harry is about to tell the world what really went on behind closed doors. I’m going to bet that if she speaks, Cressida and Harry’s break will be permanent!

Would you be furious with Harry if he were your guy?  Tell us your thoughts in the comments below!