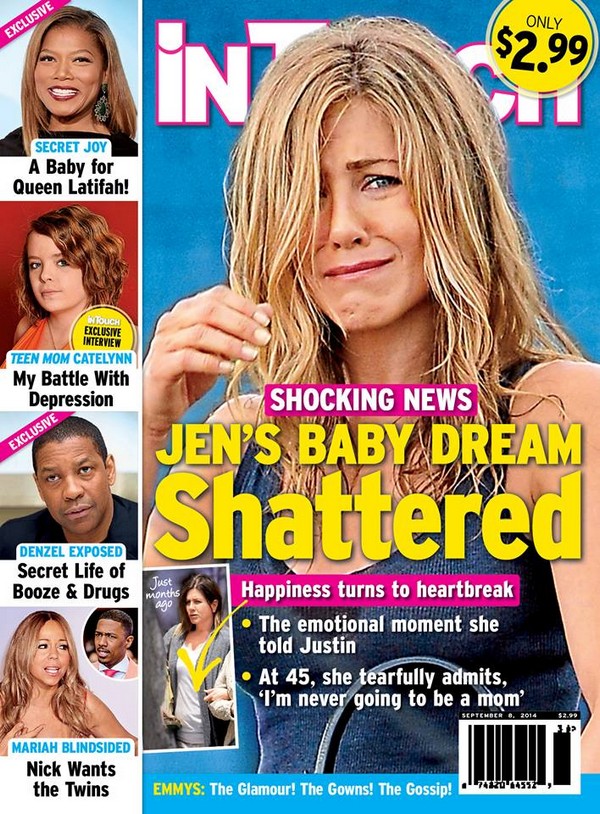 Does anyone else think that it’s bizarre that Jennifer Aniston‘s personal life makes the news far more often than her career does? Not only that but Jen does a pretty decent job of hiding out and living below the radar so it’s pretty amazing that her private life is so often speculated on. Ever since splitting from Brad Pitt is seems that the tabloids have wanted Jen to be instantly remarried and chasing after babies without really knowing if those things were at the top of her list.

According to the Sept. 8th print edition of In Touch Weekly Jen recently suffered a miscarriage and is slowly but surely coming to terms with the idea that motherhood simply may not be in the cards for her.  She supposedly is still engaged to Justin Theroux and is crushed by the reality that at 45 she man no longer be able to carry her own child. Do you think that these ongoing stories of Jen either being pregnant or miscarrying have any validity at all? If Jen really wanted a baby then wouldn’t she have moved heaven and earth to have one by now?Speaking of single mama’s- is Queen Latifah ready to be a mom? Well according to the latest issue of In Touch Weekly she is quietly experiencing some baby joy of her own. Once couple that isn’t too happy is Mariah Carey and Nick Cannon. Things have been strained between them for months and Nick has admitted they they have been living apart since last spring. Supposedly Nick thinks that the chaos surrounding Mariah’s over-the-top lifestyle is unhealthy for their twins and so he is planning on going after custody. Do you think that things will get ugly for them, especially as far as their babies are concerned? Tell us your thoughts in the comments below!