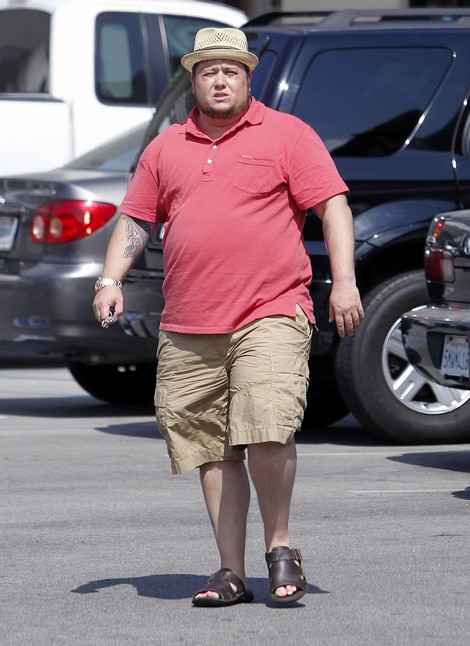 It looks like Chaz Bono is headed down a dangerously familiar path of drugs and alcohol abuse.  The star has been very open about his ten year battle that included crazy behavior and wicked hallucinations, but those close to him say that he has been in rough shape since going through a painful split last year.  Chaz’ weight has soared to a dangerous 345 pounds and he has been spotted out and about appearing to be under the influence of something.

Friends and family are already very concerned and now rumor has it that Chaz is planning on going through the last phase of his transgender surgery.

The National Enquirer has more on the situation saying, “His distraught mom Cher is begging her 5-foot-5 son to avoid the penile construction sur­gery and assured him: “You’re great the way you are – you’re already a man,” disclosed an in­sider. The “Dancing with the Stars” standout had a scary relapse once before and has admitted: “I’m al­ways afraid when I know I have to take painkillers because that’s my drug of choice and there’s always a risk of relapse.” The crusader for transgender acceptance was plagued by horrendous addictions for 10 years – suffering blackouts, bouts of vomiting and bizarre hallucinations. But he’s afraid if he follows his mother’s advice and scraps the “bottom surgery,” he’ll never feel like a real man and will have to en­dure a hellish identity crisis, say sources.”

Doctors strongly urge against any kind of elective surgery for a patient that has a history of drug addiction so obviously this operation, while necessary to finish Chaz’s full transformation, is a very risky one.  The chance of relapse is very high and it’s no wonder Cher is a mess just thinking about what can easily happen if Chaz is handed a prescription even for a valid reason.

Should Chaz err on the side of caution and scrap the surgery at least until he stabilizes and feels stronger when it comes to his addictions?  How far off the wagon do you think he has fallen?  Tell us your thoughts in the comments below.